Essential components for Japanese sake are rice, water, and malt. The rice used is called shuzo kotekimai (literally, ‘rice suitable for brewing sake’) and it is characterized by a low fat and protein content, high absorbency, good hazekomi (propagation of bacterial threads into the rice), good sugar conversion in the streamed rice, large grain size, and the presence of white cores. As the name suggests, these factors make the rice good for brewing sake. The production place, such as Hyogo Prefecture or Wakayama Prefecture, and rice variety, such as Yamada Nishiki, Omachi, or Dewasansan, differ for each sake brand.

Even shuzo kotekimai rice has components on the exterior such as proteins and fats that can alter the flavor, so the Japanese sake brewing process begins with polishing the brown brewers’ rice. The polishing rate differs by sake variety, such as 58 to 65% for junmai (sake made without adding alcohol or sugar) compared to 35 to 50% for daiginjo (top quality sake). In that process, care must be taken not to damage the white cores that are considered the umami centers. Higher polishing rates mean lower amounts of proteins, fats, and minerals on the rice exterior, creating a stronger ginjo aroma and refined flavor. 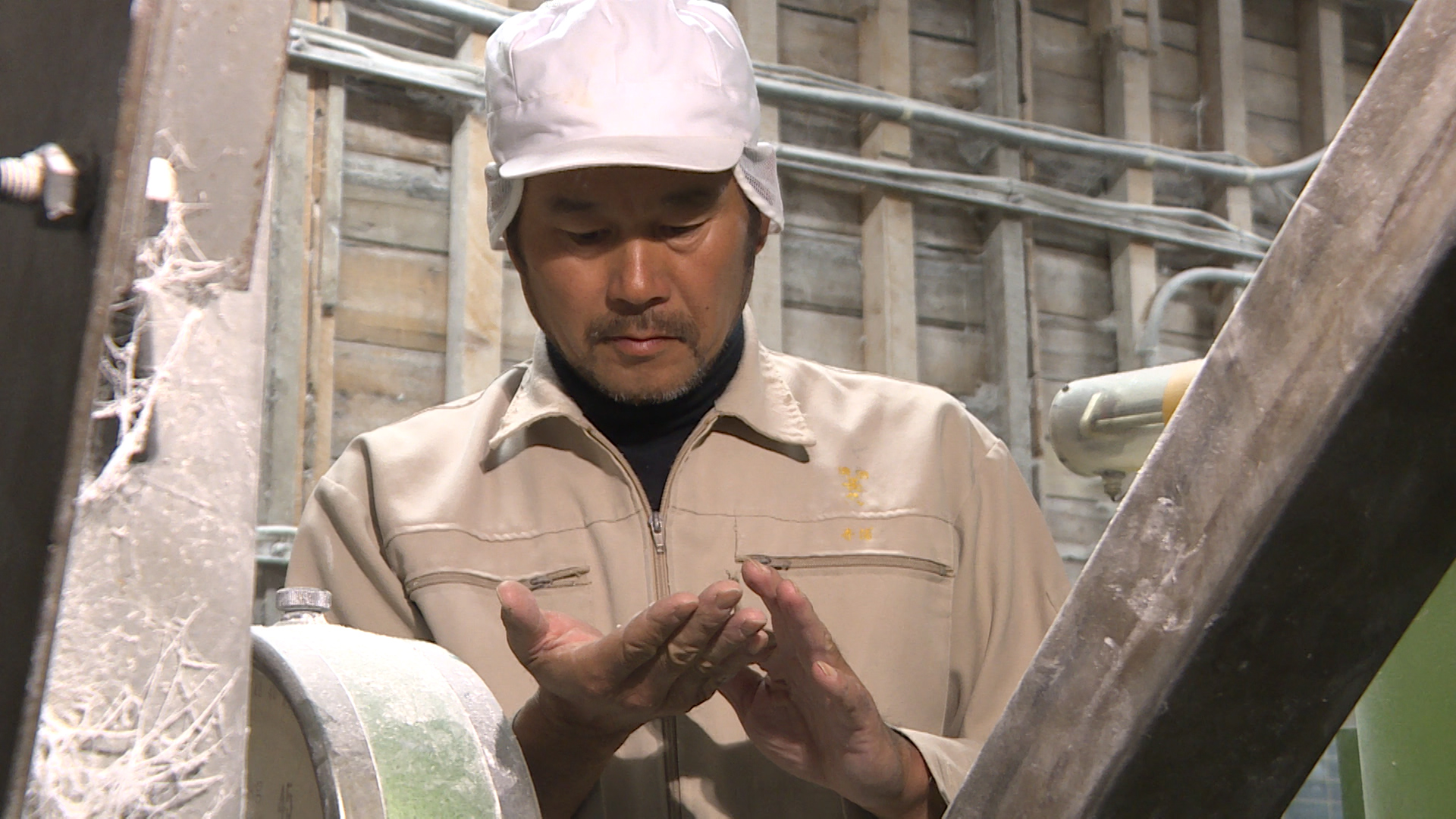 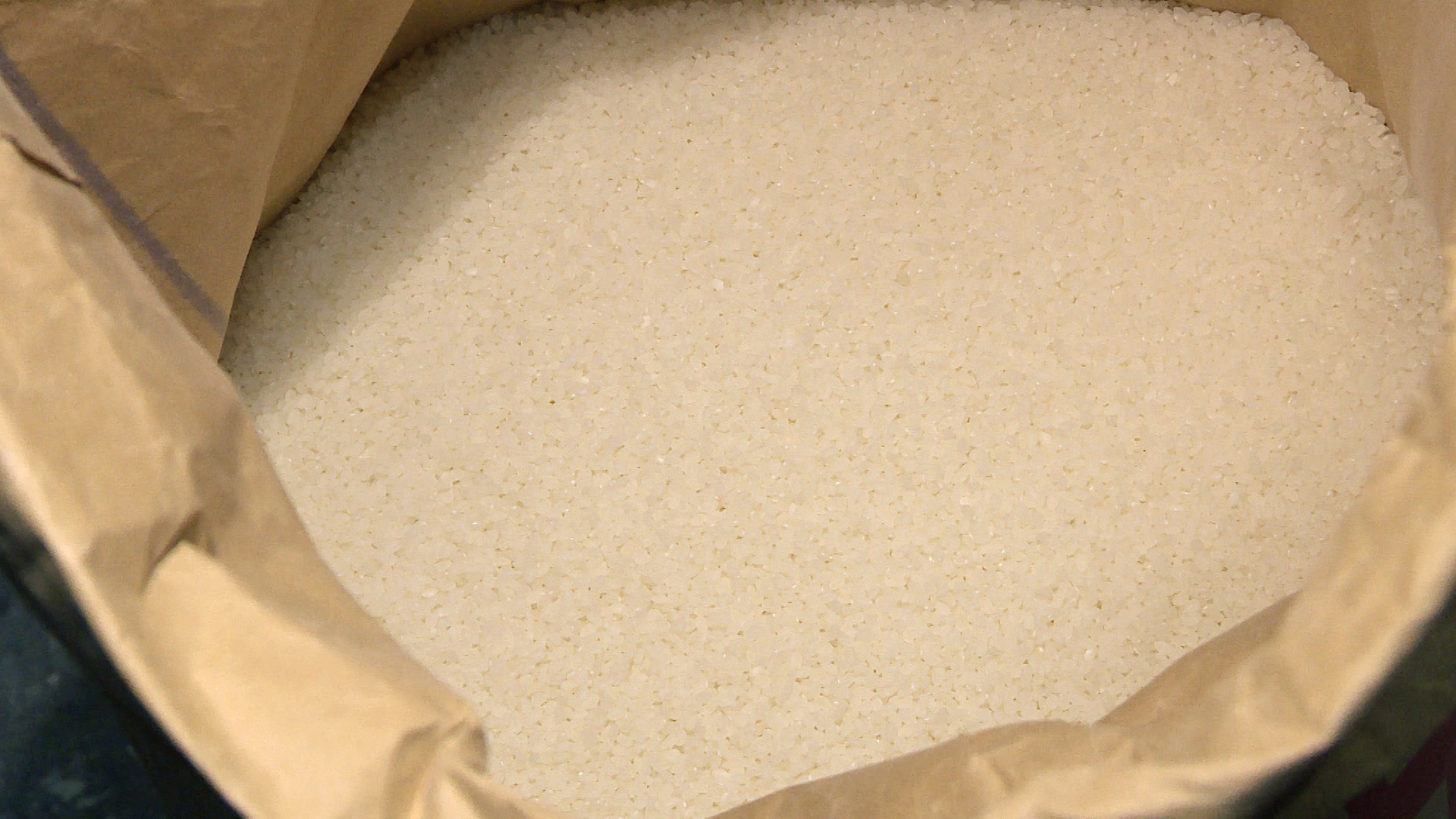 After we enter the preparation phase, rice washing work continues almost daily in the brewery. Rice that has been polished is carefully washed by hand, removing the remaining bran components while taking care not to split the rice in half. After washing the rice, it is steeped in preparation water to saturate the rice with the appropriate amount of water. The amount of water absorbed in this immersion step varies with the type of sake brewed. Some types require strictly controlled immersion times, down to the right second, so special care is needed for this step. 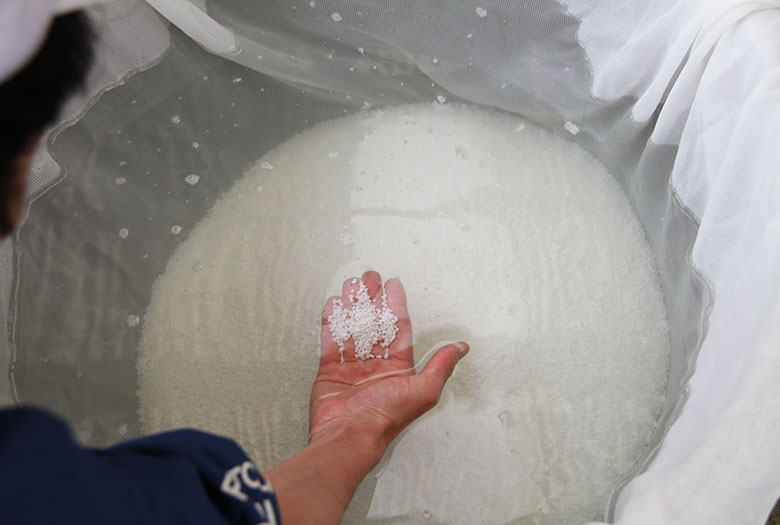 After the excess water has been removed from the rice that was immersed, the rice steaming phase begins. Steaming can be carried out in a steaming basket or a steaming machine. The starch in the rice gelatinizes in the steaming process so that the malt can decompose the rice more easily. If this step produces resilient steamed rice, it is said to make good sake. The water content at this stage is extremely critical. If there is too much water in the rice, it dissolves too easily, resulting in a weak flavor. If the rice is too hard, it will be too difficult to extract the umami from the rice. It is therefore essential to have someone who can determine whether or not conditions are optimal. This is where you can see the superior work of the chief brewer who watches over the rice results every year. This is also the stage at which rice is separated into malting rice and preparation rice. 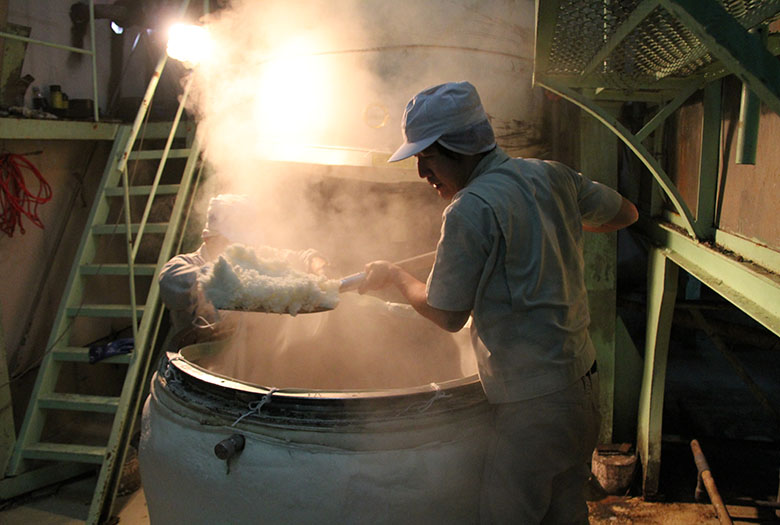 1: malt, 2: yeast starter, 3: brewing. This is said to be the order in terms of difficulty of the sake preparation steps. The most important process determining sake brewing results is malt control followed by yeast starter control and then main fermenting mash control. We also consider malt production to be the most important step in preparation, and we built a new ventilation-free malt production chamber, striving to achieve a richly-flavored malt. 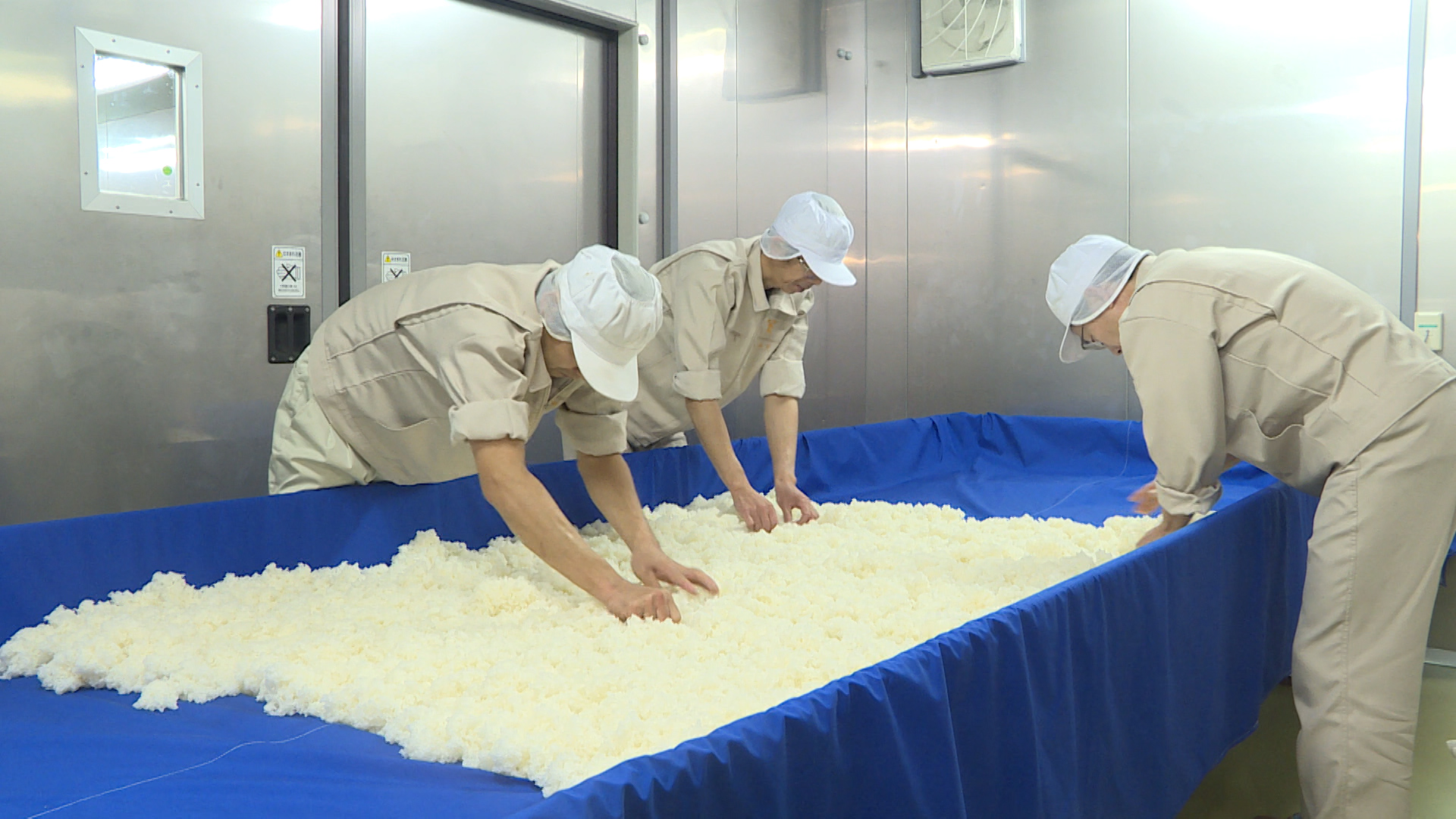 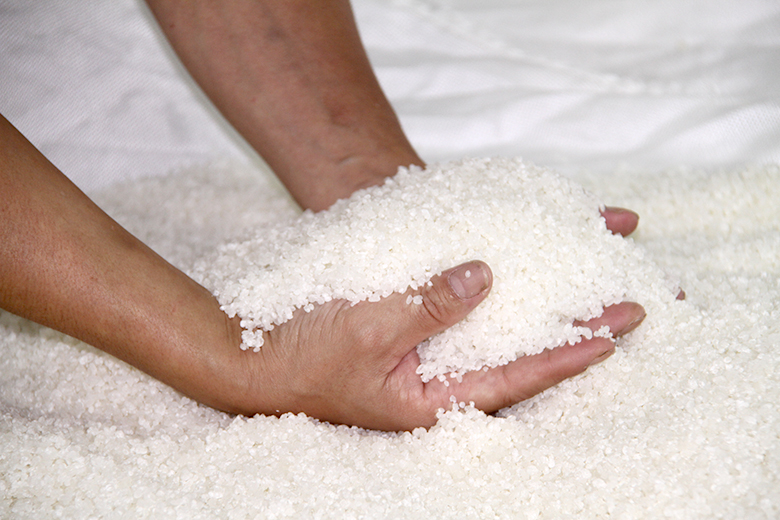 Malt production takes three days. Steamed rice is cooled to the right temperature and then moved to the malt production chamber where it is covered in seed malt (aspergillus spores) and allowed to culture for three days at a high temperature between 31 and 42.3°C. This step is also called tanekiri. During that time, the yeast is cultured and the resulting malt, the steamed rice, and the preparation water are combined and the yeast is added, creating the yeast starter. As the word ‘starter’ indicates, this is an important process that creates the start of the sake. The yeast converts the glucose created by the malted rice into alcohol. Yeast is also the ingredient that determines the flavor of the sake. Even if the preparation is identical, differences in yeast create different flavors and aromas. Choosing what yeast to use in preparation is therefore a key decision. 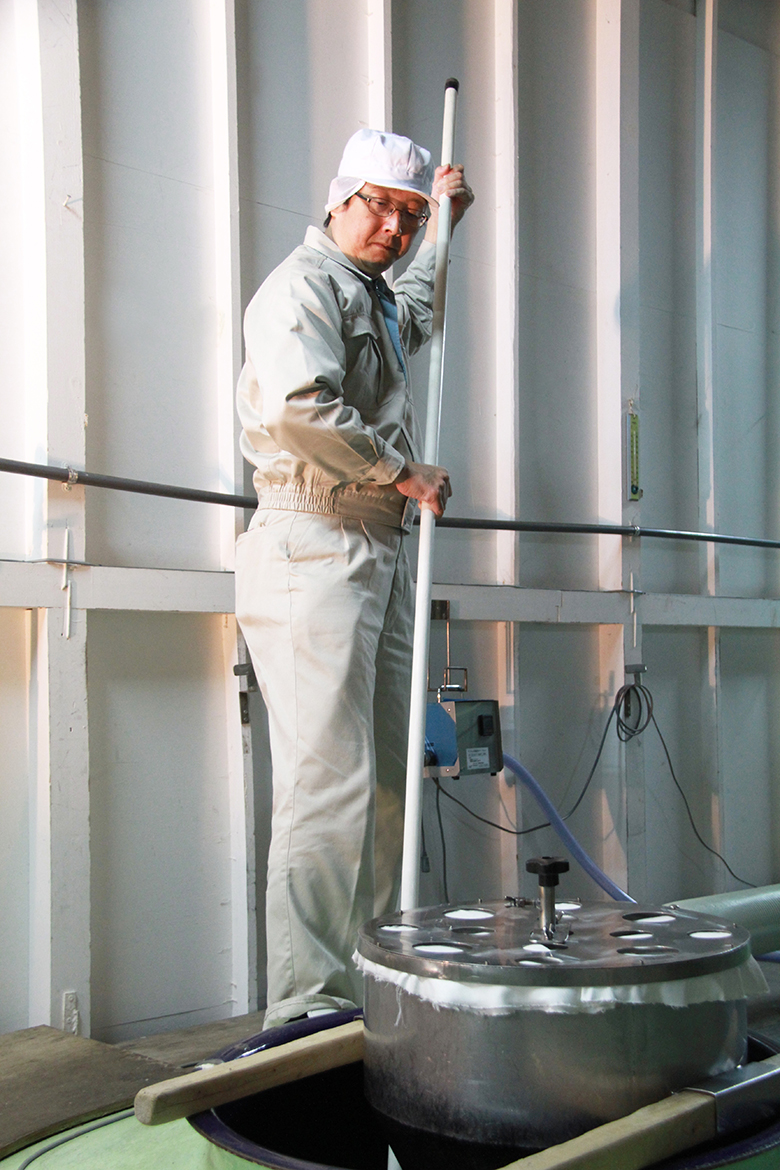 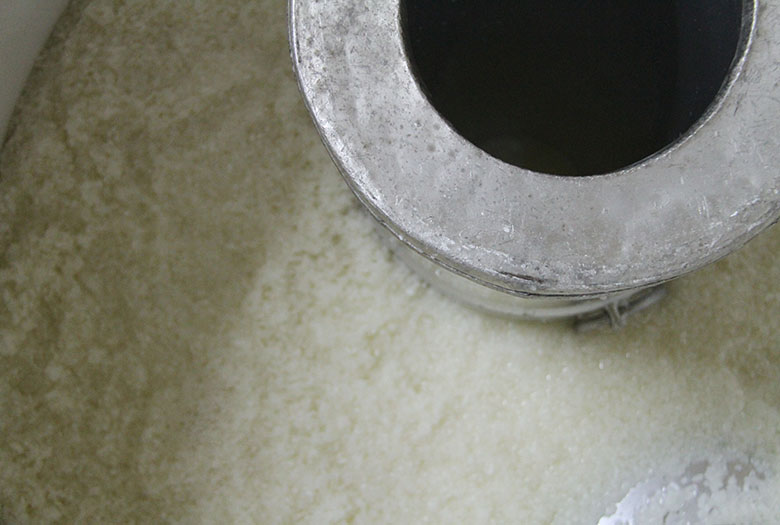 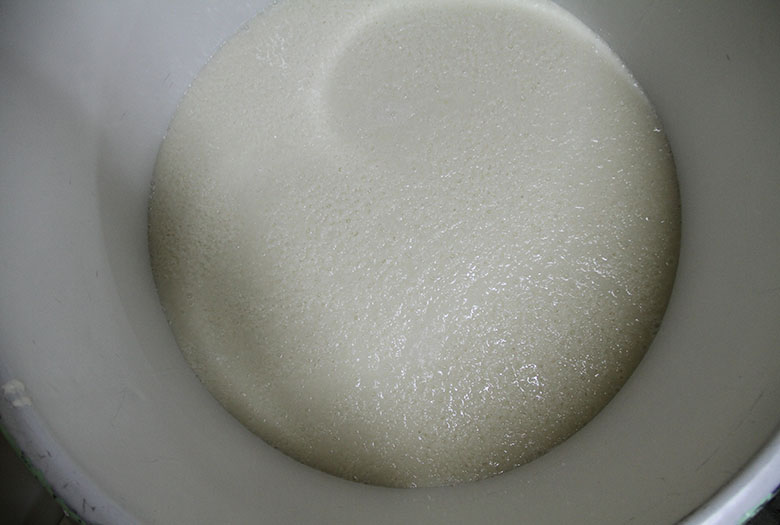 As the name kanjikomi (‘cold season preparation’) indicates, Japanese sake is brewed mostly in winter. If the ambient temperature is too high, fermentation progresses too quickly, resulting in a weak flavor. Multiple parallel fermentation is very difficult and requires great skill, as sake prepared at the same time on the same day in the same conditions can still result in completely different products. It is the job of the chief brewer to assess the climate conditions and skillfully manage the brewery. The chief brewer is also the manager of the brewery and the leader who carries out overall management of the sake brewing processes. This person is responsible for not only the sake brewing, but also management of the other brewers and control of the sake production environment in the brewery. There are chief brewer groups and schools around Japan, each with slightly different flavors. Our chief brewers belong to the Noto school characterized by a liquor quality that brings out both umami and sweetness. In previous years, our chief brewers only stayed at the brewery during the preparation period, but they now stay as employees, managing not only preparation, but all operations year-round.